It all started on a dark and stormy night.

The rain was closer to horizontal than vertical when Bekket and I locked the front door of our sharehouse behind us.

We exchanged cheeky grins and  a quick thumbs up, then sprinted down the street to the spot where Bekket’s car was parked.

The back of the car was full.  Full in a way that can only be achieved by someone who spent their childhood playing Tetris and their adulthood squeezing far too many outdoor activities into their weekends.

We were on our way to Coonabarabran to visit Doctor Mowgli.

Mowgli was our housemate, fellow adventurer and partner in mischief.  She was part way through her placement at a General Practice. She was keen to climb the spectacular rock features in the nearby Warrumbungle National Park. 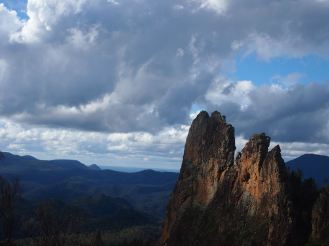 Breadknife from a different perspective

Climbing in the Bungles is a daunting proposition.  You have to trek a long way up and up and up from the road, before you can set up your campsite.  You have to carry all your food, water, camping gear, ropes, climbing gear, warm clothes, wine and other necessities in your bulging pack. Once you reach the Grand High Tops, everything feels quite isolated and wild.

Then there’s the rock itself, which is famously loose and terrifying. The climbs are long.  Route-finding can be tricky. The exposure can get pretty damn intimidating.  Sometimes just getting to the bottom of the climbs can be an adventure.

Despite knowing all this, Bekket, Mowgli and I hatched plans for an all-girls expedition.

It would be scary, but we could handle it. We did our research and picked out a couple of climbs that we hoped to squeeze into an epic weekend mission.

Let’s go back to Bekket’s car.  It’s hurtling down the Golden Highway in the dark.

Every now and then the horizon is lit up by huge bolts of lightning.  Bekket politely asked if I wanted to switch out of the drivers seat. My knuckles were white and I was leaning over the steering wheel peering desperately through the rain. It was probably better that she drove the rest of the way!

A few kilometers later, the fuel light came on. That little red light didn’t seem so bad compared to the huge bolts of lightning all around us.

We called a friend who drives along that road fairly regularly.

I switched the phone to loudspeaker so that Bekket could follow the conversation.

“Yeah we’re good” I continued.  “We were just wondering what our chances are of finding a petrol station between Denman and Coonabarabran at this time of night?”

Our friend’s laughter echoed loudly round the car.

“You guys are in trouble”

Bekket and I got as far as the town of Coolah.

The fuel light was flashing angrily as we pulled into the main street. We wandered into ‘Top Pub’ and asked if anyone could help us feed the hungry car. Everyone was friendly, but no one had any fuel to spare.  They suggested that we ask Mowgli to bring us fuel from Coonabarabran, which was only 100km up the road.

Mowgli agreed to fill up a jerry can and come to our rescue.

Once the rescue plan was in place, the patrons at Top Pub challenged us to a game of pool. The game lasted for over an hour because Bekket and I aren’t amazing at pool, and the locals were no longer sober enough to hit the ball straight.

Someone sunk the 8-ball eventually. We received quite a few friendly offers of places to stay the night.  At that point we decided to make a graceful exit and see how far we could get before we totally ran out of fuel.

We caught up with Mowgli about 70 kilometres out of Coonabarabran.  The lightning was still pulsing furiously while we refuelled Bekket’s car.  We made it to Mowgli’s place well after midnight and abandoned our plans to hike into the national park that night.

First views of the rock

The storm had blown itself out by morning. We drank a lot of instant coffee, squished all our supplies into our packs and drove to the boundary of the national park. We checked in at the visitors’ centre to lodge our intentions then started the long walk uphill.

Half the contents of Mowglis’ bag

The three musketeers, packed and ready to go

Competent mountain men, sharing the floorspace with us

The hike was spectacular. The previous nights’ rain intensified all the colours around us.

A huge bushfire had been through the park a few years earlier.  Evidence of that fire was still visible.  The park was all bright green and black, with warm orange rock shooting up to the sky in unexpected places.

Bekket enjoying the views during the hike in

By the time we reached the Grand High Tops it was too late to climb anything serious.  We decided to concentrate our efforts on finding the start of a route called Vertigo, which we would attempt the following day.

Even that was a mission.  Some of the trails were closed, and others had become overgrown since the bushfire. The three of us followed streams that were frozen in some places.  We scrambled up and over boulders and constantly wondered if we were going the right way.

We were relieved when we finally find a big white letter V painted onto the base of the Belougery Spire.

Alarms went off far too early the next morning.  Next came the sound of tents being unzipped.

We all wolfed down some muesli and set off towards the base of our route.  We wore every layer of clothing we had to ward off the cold. 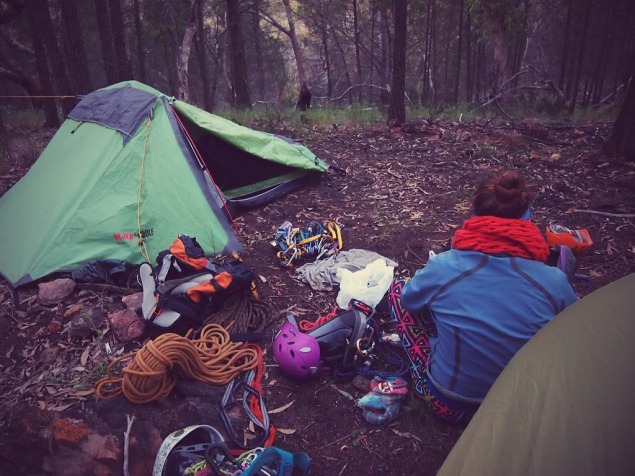 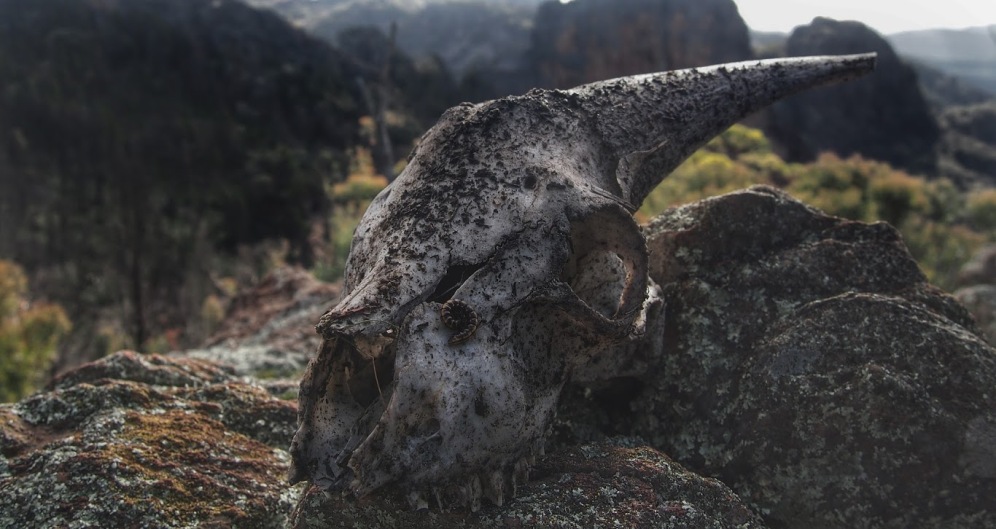 Ominous omens to start the day

Bekket bravely led the first pitch.  I’m not sure whether we were on the right route or not. If felt bloody hard climbing with frozen hands. Bekket did super well to handle the long run outs and dodgy rock. 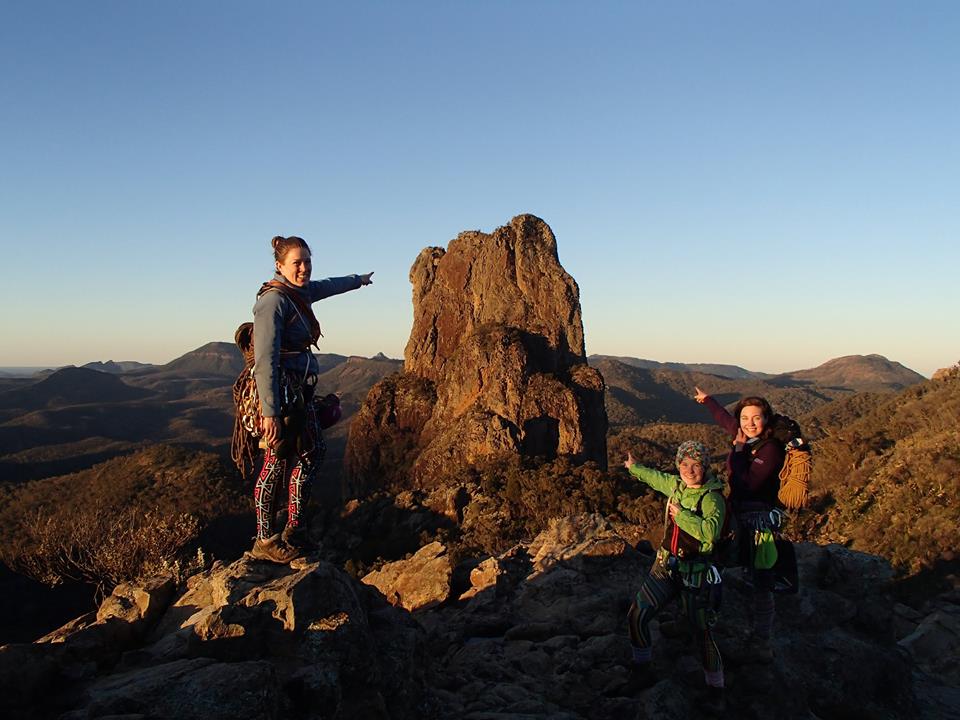 Pointing out our objective

I was up next. I led off above the other two ladies.  I tried not to kick loose rocks down on their heads.  The rock quality got even worse.  The three of us were shivering with cold. We weren’t sure if we were on the right part of the spire.

Eventually we made the decision to bail.  I carefully down-climbed my short pitch and removed the dubious bits of gear that I had managed to place.

Enjoying some tasty chocolate after my down climbing mission

Reaching for the sun

Bekket enjoying the first rays of sunshine for the day

Mowgli took the sharp end of the rope at that point.  She traversed to the point where the rap station was supposed to be.  First she found a scary pile of rust that might have been safe decades earlier.  Then she found the holy grail.  Shiny new ring bolts, perfect for lowering back to safety.

Mowgli finding us a way down

Bekket and I all smiles at the ring bolts

Mowgli brought Bekket and I around to her new perch and we abseiled back down to relative safety at the base of the route.

Halfway back to camp, we ran into the two guys we’d shared our campsite with.  They had both soloed a number of routes on Bluff Mountain that morning and had come across to check on us. We swapped stories and snacks and started to make our way out of the national park and back to civilization.

Some people might say that the whole trip was an unmitigated disaster.  We had run out of fuel in the car and we hadn’t made it to the top of a single climb.

But this particular weekend stands out as one of the good ones.  It was great to get out in such a wild place with two people who have become something like sisters to me.  Sure, we didn’t reach the top, but we got ourselves into just the right amount of trouble and we had the skills we needed to get ourselves out of it safely.

We weren’t damsels in distress.  We were damsels in two layers of down jackets having a crack at something new. We made our own decisions and relied on our own skills.  We don’t get that opportunity very often when we climb with guys.

On this particular weekend, the three of us climbed with eagles flying below us. We enjoyed epic views of lava tunnels stretching out towards the horizon. We giggled together and ate chocolate high above a beautiful national park. We worked together as a team and had smiles on our faces for most of the day (even if our teeth were chattering).

I’m counting it as a win.