I flew to New Zealand with a backpack that was 2 feet taller that I am.

Inside the bag was all my camping gear, all my mountain biking gear, and a second set of adventuring equipment for my little brother.

He has been working in NZ for a few years, and this was my first chance to visit him.

We decided to tackle the Tongariro Northern Circuit – an epic 4 day hike through volcanoes, rainforests and the wilds of Mordor.

Neither of us had ever hiked for 4 days before.  My brother was going to be starting the hike right of the back of a huge nightshift. Perfect preparation!

We drove from Auckland to Tongariro National Park under dark grey skies and heavy sheets of rain.  I assured my brother that everything was going to be fine. A little rain never hurt anybody.

The rain was bucketing down when we reached the visitors centre in Whakapapa.  We decided to wait and see if the weather improved, before we left the safety of our car.  We ate lunch at the base of the skifields on Mount Ruapehu and tried hard to ignore the sound of thunder echoing off of the ominous black cliffs around us.

“It will be fun” I said, trying to sound optimistic, as I dug my rain jacket out of my pack. 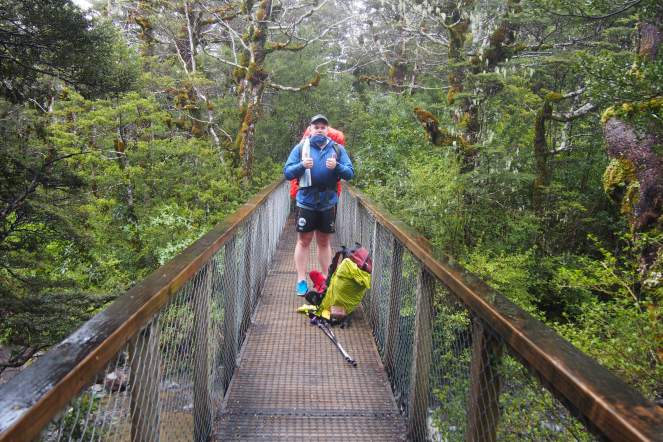 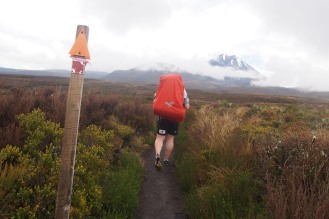 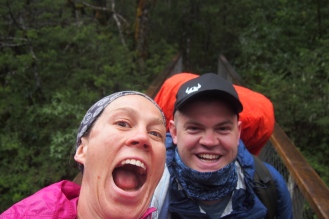 Miraculously, the storm moved away and the rain became less intense.  We loaded up our packs and started the 8.5 kilometre walk to Mangatepopo Hut.  This is where most people doing the one-day Tongariro Alpine Crossing start their adventures.

We reached the hut and set up camp in the late afternoon sun. We spread out wet clothes around camp to dry them out and took hundreds of photos of Mount Ngaurahoe (aka Mount Doom).

We woke up when the sun dropped over the top of Mount Tongariro and onto our little blue tent. I mumbled something about coffee and stumbled around camp for a while making breakfast.

We then set off on the toughest section of the walk. The Devil’s Staircase took us about 600 vertical metres up and over Mount Tongariro, towards Red Crater and the spectacular Emerald Lakes. 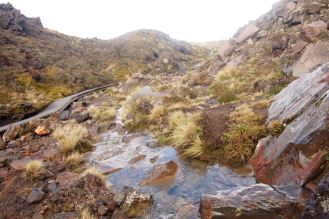 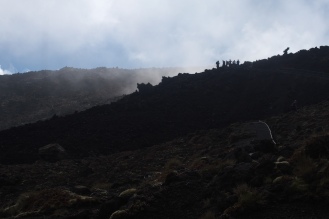 We were overtaken on the stairs by a group of guys in Port Adelaide Power training gear.  These lanky AFL players seemed to be on some sort of pre-season sufferfest. They would walk the flat sections of the climb, do 10 pushups each time they came to a set of stairs, then run the stairs. They kept that up for the whole Alpine Crossing track.

My brother and I were sitting to the sit of the trail, on top of our bulging backpacks, chomping on chocolate bars and marveling at their madness.

We had been walking upwards through heavy mist all morning.  We were worried that we would finally reach the top of our climb and miss out on spectacular views over the valley.

We reached the crest of Red Crater and walked into blasting sun and bright blue skies.  The valley we had come from was a sea of mist, but the other side of the mountain was a whole other world. 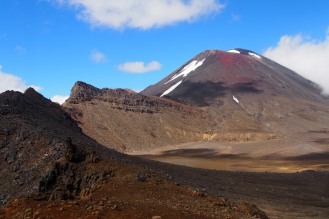 We crossed Red Crater and soaked up the glorious sunshine.  It felt like we were on Mars. We didn’t realise that the toughest part of the climb was ahead of us.  The loose, rocky scramble to Emerald Lakes had us both huffing and puffing and wondering what the hell we were doing in this crazy place.

Eventually we made it to the lakes. Clouds of sulfur were pouring out of the mountainside and over the lakes.  My brother would point to these plumes and say ‘Look at all that stink-puss’.  He has a way with words. We spent the rest of the day pretending that the unpleasant smells wafting between us were coming from the volcanoes, rather than the huge amount of salami that we demolished for lunch that day. 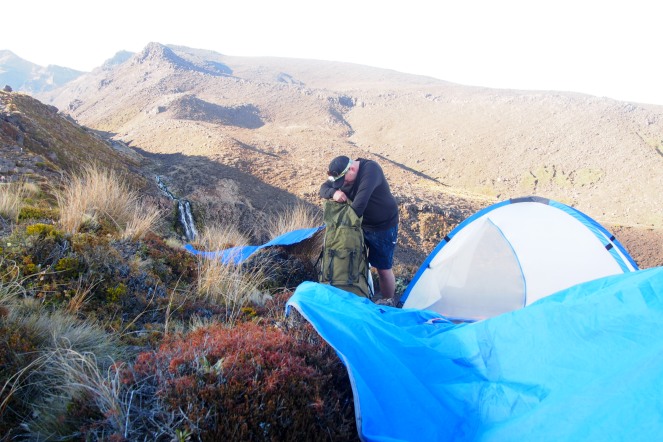 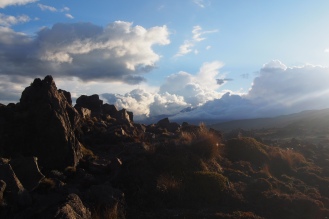 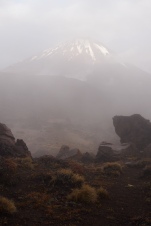 At that point, our path diverged from the Alpine Crossing track.  While our AFL playing friends veered off towards Blue Lake, we dropped down the mountains towards Oturere Hut.

My bro set up the tent on a ridgeline next to the hut.  You could lay inside the tent and see a huge waterfall thundering down to the stream below. If you looked out the other side of the tent, you could see the snow-capped peaks of Mount Ruapehu popping out of the clouds.  Not a bad little campsite! 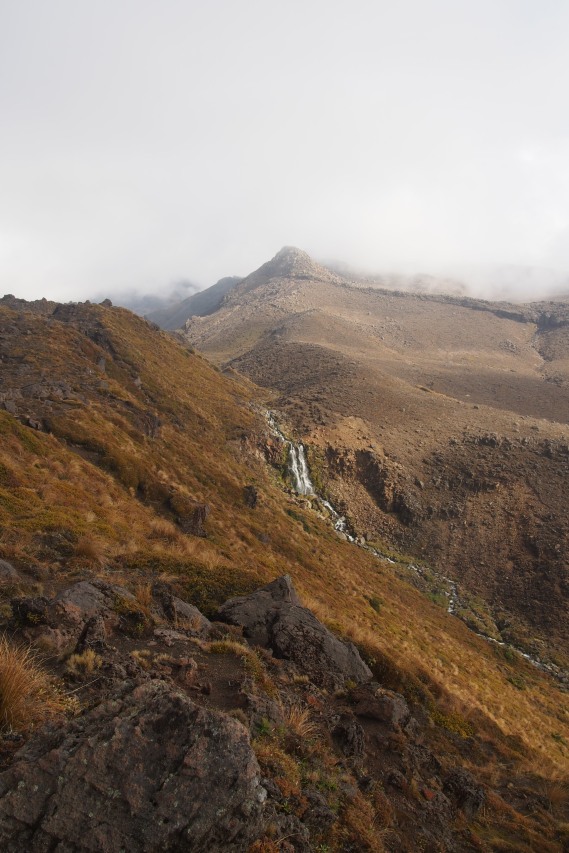 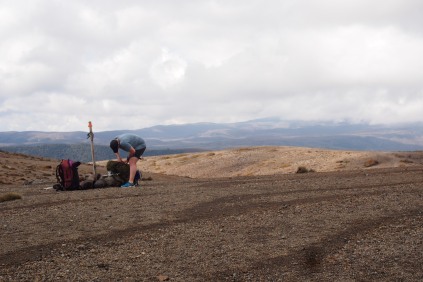 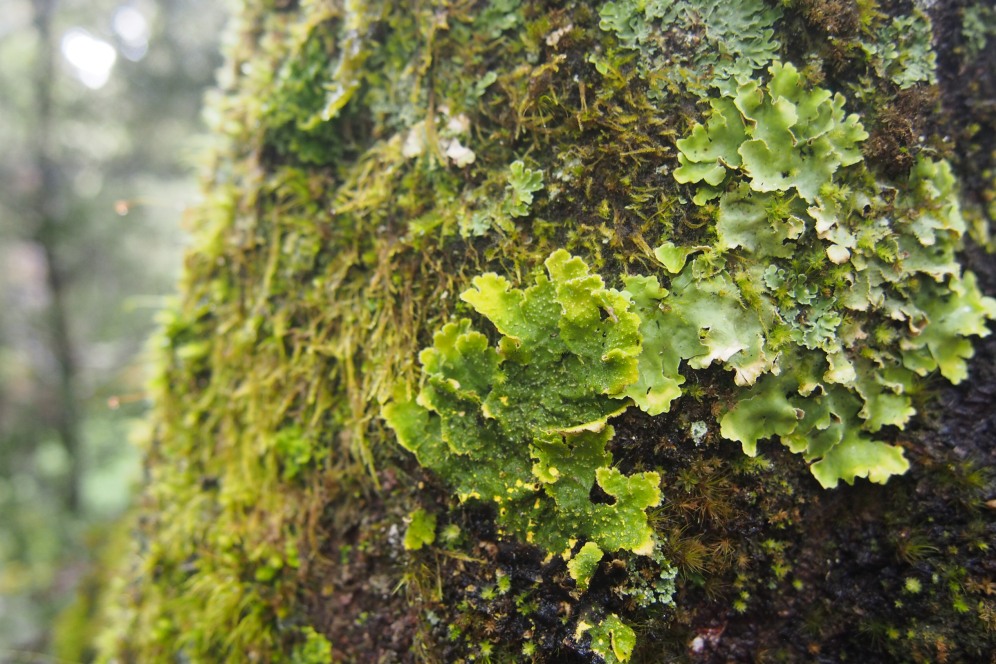 We had a leisurely start to day three. We had a few extra rounds of coffee before starting the 7.5km walk to  Waihohonu Hut.  The first few hours took us through New Zealand’s desert.  We walked up and over countless rolling dunes made of small pebbles.  There wasn’t much growing on this side of the range. We cursed our heavy packs as teams of lean, sinewy trail runners waved to us and smiled brightly as they zoomed around us on the trail.

After an hour or so of walking through the desert moonscape we crossed a little stream and found ourselves in a lush green rainforest. We climbed steeply through the forest, which felt unbearably humid after the crisp dry desert section.  By the time we popped out of the rainforest, we were both grumpy sweat monsters who just wanted food.

We arrived at Waihohonu Hut just before the rain came bucketing down.  We were happy to be inside the newly refurbished hut, which had a great kitchen and lots of space for playing board games, reading books and relaxing in comfort.

When the sun came out again, we ventured to Ohinepango Springs. Cold water flows underneath the old lava flows coming down from the mountains, then pops up to see the sun for the first time, in the middle of the rainforest.

I dipped my toes in the water to test the temperature.  Just as I decided it was too cold, I saw by brother whizz past me, and dive straight in.  Seconds later, he was out again, wrapped in his towel and saying ‘well, that was refreshing’.

Me being wildly happy outside 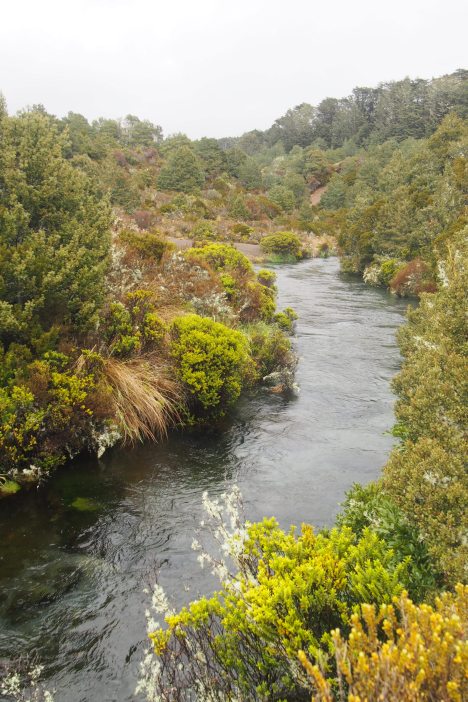 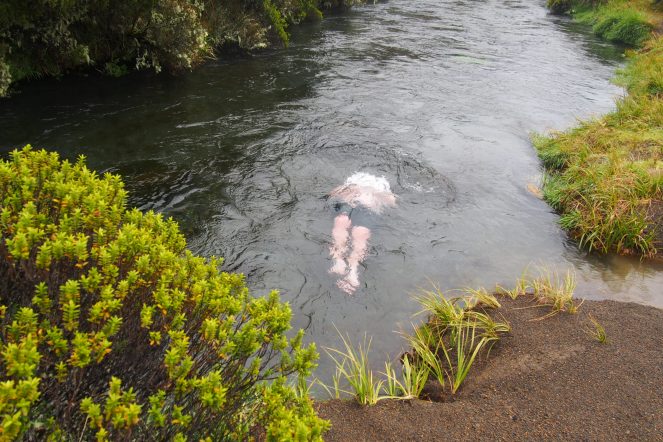 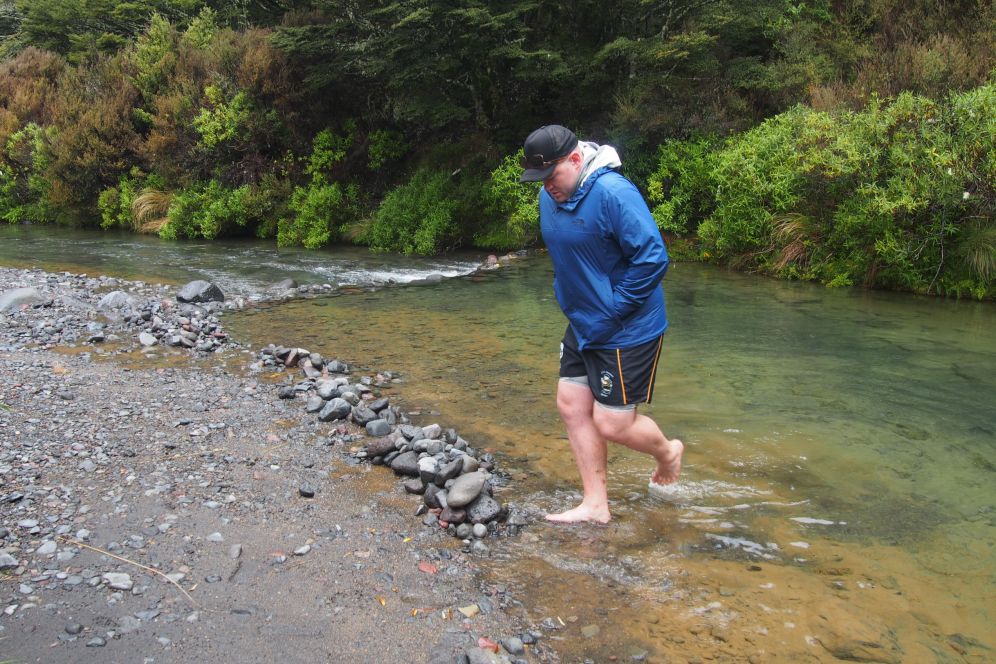 We returned to camp and spend a few happy hours building little dams and redirecting the flow of the small creek next to our tent.  We used to do the same thing at Christmas time when we were much younger. We’d spend days moving rocks around in the creeks running through Mount Warning caravan park on our biannual family holidays.  It was all fun and games until someone disturbed an eel from the creek, which would always send me squealing back towards the safety of our camp.

After 3 days of hiking, it was nice to spend time pottering around in the water with my brother, just like we did when we were kids.

DAY FOUR – BACK TO WHAKAPAPA VILLAGE

Our alarm went off at 5am 4.30am on the fourth and final day.  We had to cover 15 kilometres to get back to our car, then my bro had to get all the way back to Auckland for work the next day.

The early start meant that we got to watch the sunrise over both Mount Ruapehu and Mount Doom.  The summits of both mountains had been covered in cloud for most of our walk, but on this morning, everything was clear, crisp and spectacular. 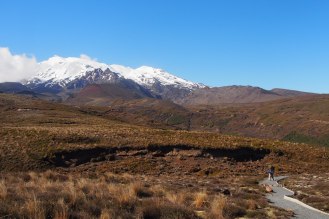 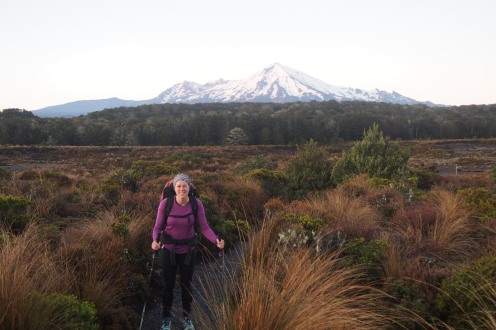 We didn’t quite have the legs to take any side trips to Tama Lakes or to the base of Taranaki Falls.  We peaked down from the top of the  waterfall and forced our heavy legs to waddle the last few kilometres back to the car.  They were the toughest kilometres of the whole trip.

Before long, we were back in the comfort of my brother’s car.  We drove straight to Burger King and ate enough chicken nuggets and burgers to feed an entire family.  My brother said something like: ‘Give me about 2 months, and I’ll thank you for this… and tell you it was fun’.  Then the conversation moved on… to what we would eat next.

The Department of Conservation has put together a great guide for the Northern Circuit.  It shows the location of the huts, the elevation changes along the route, information about side trips and interesting info about the geology and wildlife in the area.

If you go during the Great Walks Season (23 October to 30 April) , you need to make bookings to stay at the campsites or in the huts.  Outside that season, you can pick your own adventure – you just need to be aware of the weather and snow conditions before you go.

The huts all have designated hut wardens, simple communal sleeping areas, clean running water, drop toilets, and gas cookers in the kitchens. You could travel pretty light if you relied on the hut facilities, instead of carrying all your own gear. If you are relying on the huts, it’s best to book your spots a few months in advance.

The trail is incredibly well marked, so you don’t need superhuman navigational skills.  Just keep following the little orange arrows, and say thanks to the parks staff who maintain them.

Some people prefer to do the hike anti-clockwise, or to power through it in 2 or 3 days, instead of 4. But if I were to do it again, I wouldn’t change a thing!