Earlier this year, a message popped up on my phone. It was a link to the MS Gong Ride website and the word “Keen” with a question mark after it.

A bunch of climbing friends were thinking about forming a team, and wanted to know if I would join them.

It’s an event where you ride a bike 82km (or just over 5o miles) from Sydney to Wollongong and then ask people to sponsor your suffering, to raise funds to support people living with multiple sclerosis (MS).

Check out my last post for more stats and stories about what it can be like to live with MS. 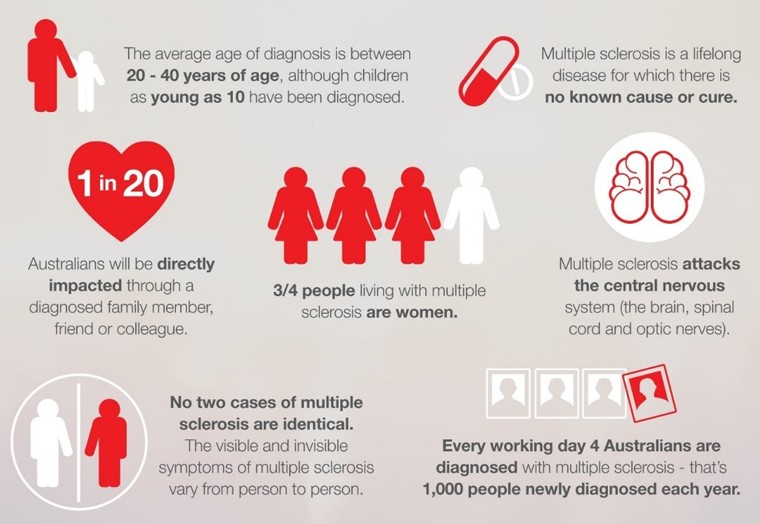 I decided to sign up for the challenge.  I have a tendency to optimistically sign up for events that are far enough in the future, that I can imagine that future-me will be very disciplined and train hard.  The training never happens. And I always find myself cursing past-me, for getting me into stupid situations.

The weekend of the ride rolled around much faster than I had anticipated. My bike and I rushed onto a train from Newcastle to Sydney on Saturday evening. I crashed with a friend from college. I woke up to the sound of  torrential rain belting down onto the streets outside her apartment.

The wonderful Elle chauffeured my bike and I to the start line in Tempe.  I had originally planned to ride the 8km from her apartment… but that morning, she looked out the window at the grey wet world, shook her head at my madness and started carrying my gear down to the garage.

I sat in the passenger seat of her car, with the air conditioner blasting nice warm air into my face and my phone.  I was checking the weather forecast on every website I could think of.  I lingered longer on the sites that suggested that it may stop raining at some point in the next 48 hours. I  quickly skipped over the ones that told me that the weather was only going to get worse.

Elle dropped me off at the IKEA car park at Tempe. I zipped up my rain jacket and joined the stream of bikes heading to the start line.  I met up with my shivering teammates. We snapped a few photos and started our ride at 7.45am.

By 8am, the Sydney rain had shifted from steady vertical sheets of water to big fat drops that came in at you from the side.

By 8.15 my rain jacket was completely soaked through.  I could feel cold water dripping down to my elbows under the jacket. As we rode past the beach at Brighton, I couldn’t quite tell where the grey ocean ended and the grey sky began.

By  8.30 I was wondering why I hadn’t packed a pair of gloves. My hands were locked into claws around my handlebars.

I was starting to wonder what I had signed up for.

It was around then that I rode past the first members of the MS cheer squad.

People in bright red T-shirts were stationed every few kilometres along the course.  They had signs telling us that there was a left turn coming up, or that we had already done 10km or that there was a rest stop ahead. Most of them had no shelter and their clothes were soaked through.  They must have been freezing.

As I rode past them, they would yell things like “Thank you!” and “Don’t let the rain get you down!” and “You can do it!” and “You’re amazing!”

They made me stop my grumbling and realise that as wet as I was… at least I was moving and staying warm.  I was going to be riding through some gorgeous national parks with the roads closed and no traffic to worry about.  There were people who had got up before sunrise to set up rest stops for me, to bake me delicious muffins and to help me arrive safely in Wollongong.  After the tenth person told me that I was amazing… I started thinking that they might be right.  I felt great! I was going to smash this ride!

The bedraggled volunteers were dancing and clapping and showering me and the other riders with gratitude and stoke.

I started yelling “thank you” back to the volunteers.  I started dancing along with them (or at least bopping along as much as I could while staying on the bike and not bouncing into the other riders). The ride suddenly became wild and ridiculous and fun. 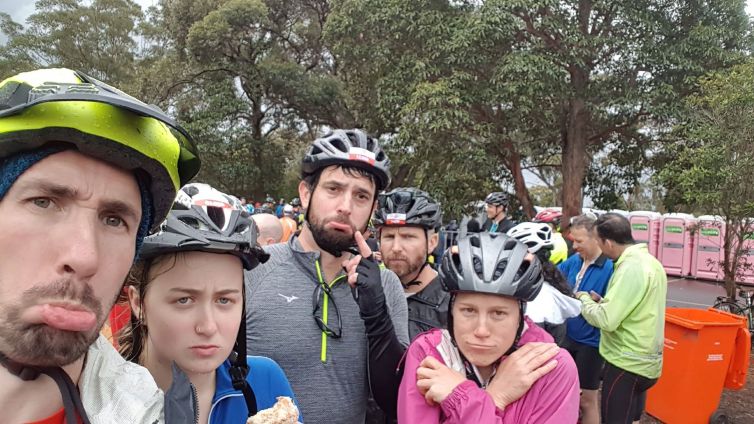 10,000 riders registered to participate. There were sleek looking athletes on impressive road bikes.  There was a team of guys who wore tartan kilts and rode fat bikes the whole way.  Families rode together on mountain bikes from every price range. I saw plenty of tandems and a few recumbent bicycles. Chris did the whole course on his beast of a mountain bike. One guy rode a huge pennyfarthing, which was pretty damn impressive. 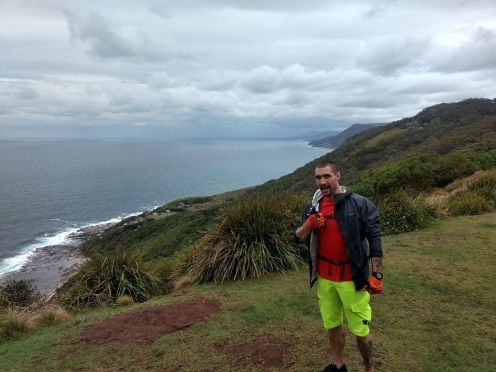 There were plenty of rest stops along the way, filled with even more cheerful volunteers who had baked muffins to share, who would fill your drink bottle up for you and who had impressive production lines going to ply us all with hot tea and coffee.

I found myself grinning over my coffee cup at the other riders.  Most of them shot ridiculous grins back at me. We all knew it was kind of mad to riding in such awful weather… but we were having fun.  Thousands of riders just looked like happy little kids who had just gotten away with something particularly mischievous.

For most of the ride, we had our own designated lane to ride in without fearing the traffic.  On the longer descents, the organisers would close the road to traffic for a period, and give us a police escort to the base of the mountains.  I will never forget the smell of hundreds of brake pads being locked on as hundreds of brightly coloured cyclists tried to navigate their way down the slick winding roads of Royal National Park.  Some people flew down.  Others walked down.  The majority of us just rode the brakes, slow and steady, with the mist mist swirling through the rain forest on either side of us. 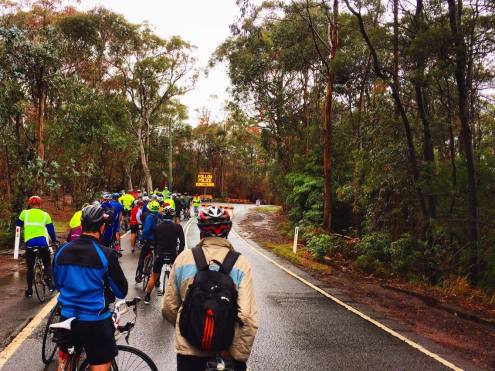 Jesse and I stuck together for the second half of the ride. He has no qualms about yelling “PASSING ON YOUR RIGHT” at the top of his lungs.  I followed his back wheel… pretending he was an ambulance, parting traffic.  Occasionally I would smile at the startled riders to our left and quietly wish them an enjoyable ride.  Jess confessed that one advantage of having an American accent is that everyone EXPECTS you to be loud and obnoxious, so you can get away with a lot. 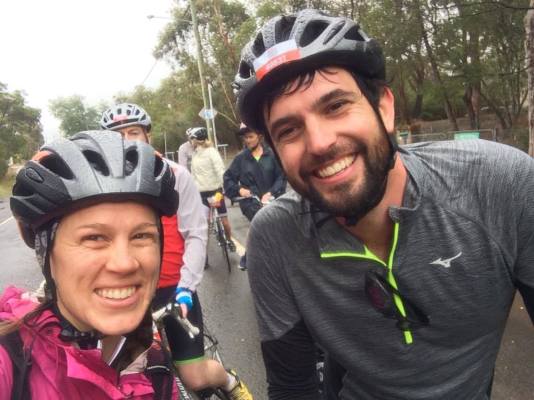 Jesse was also quite happy singing at the top of his lungs as we pedalled along. I particularly enjoyed his rousing rendition of ‘I Believe I can Fly”, which he busted out as we were coming down into Austinmer. He whizzed down towards this little beach town with both hands off the handlebars, arms spread wide, flapping like a majestic two-wheeled swan.

I think I need to step up my back-up-singing game for the next big ride. A cappella cycling… it’s going to be a thing.

Before we new it, we were crossing the finish line in Wollongong.  Jesse’s extended family-in-law clapped and cheered for us as we crossed the line.

Team Cyclopath was eventually reunited at the Illawarra Brewery.

We all raised a glass to an excellent adventure. Beer has never tasted so good.

You can still make a donation:

Click here to make a donation to support people living with MS.

The atmosphere out on the course was awesome. The organisers made it very clear that  it was not a race. It was all about getting people to participate and stay safe.

There was no shame in getting of your bike and walking up or down the steeper bits of the course.

There are bike mechanics all over the course to help with punctures and other mechanical issues.  And you can stop and eat every 10-20kms!

There are even support vehicles at the back of the pack, so you can jump on a bus if you’re not feeling it on the day.

There is a powerful momentum that builds up when you’re riding with such a big group.  Even if you haven’t done a long ride before, you might surprise yourself with just how far you can go!

Click here to register your interest in the 2018 ride.